History of the Arts Centre 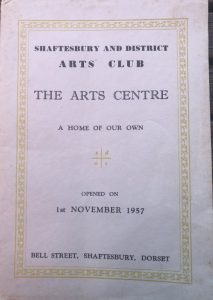 Market Playhouse had its Grand Opening in November 1957 with a performance of “The Sleeping Monk” with proceeds going to the restoration fund of St Peter’s Church, Shaftesbury’s only surviving medieval building.  A newsletter produced to coincide commented: “The Sleeping Monk” is known to some natives and more visitors as a rather weather-worn little figure who, from his perch in the north-west corner of St Peter’s north aisle, has watched the doings of Shastonians for some 800 years.  He was not originally in the script but a chance enquiry by an Australian visitor has made him at once the title and the narrator of Miss Sydenham’s play. 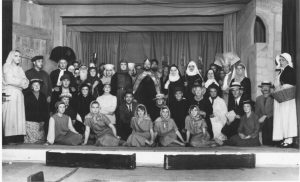 “We hope he will be well satisfied with what he sees and hears and that when he returns to his niche in St Peter’s on 12th November to resume his interrupted slumbers, he will sleep all the more soundly for discovering that Shaftesbury at least is awake.”

The eight performances sold out.  As the eager audience entered from Bell Street, the Lobby and Foyer gave access to the exclusive Club Room.  Stairs on the left hand side led to a small landing, the ladies cloakroom, a tiny office, and the Camera Group dark room.  A narrow low-slung passage led to the theatre control room and housed the wardrobe.  Only a very small person could stand upright, and to get into the control room you climbed over a roof truss.  Next to the stairs was a door leading down to two small kitchens where the ladies brewed up tea and coffee, which was then passed up through a small hatch into the Club Room.  The Theatre itself had a raked floor with 220 upholstered tip-up seats from the Stoll Theatre in London. The roof of the theatre had exposed steel roof trusses and tie bars.  Down the left hand side were a series of glass skylights, which under heavy rain tended to leak onto the audience beneath!

In 1958 the Shaftesbury Choral Society was born.  Long-time Shaftesbury resident Mike Sims joined the Arts Club in 1962 and remembers taking part in the Juniors’ Day Entertainment “singing a duet with Valerie Croxford.  Before I knew it I was taking part in my first play “The Queen and the Welshman” in a bit part as Page to the Queen!  Not good for my street cred as I appeared in a tabard and tights and was ribbed mercilessly by my cricket and football buddies.  My first big part was as Charles Wykeham in the eventful production of “Charley’s Aunt” the following year.”

By 1962 the Management Committee realised it was time to consider altering and improving the facilities, especially at the stage end of the building. Plans were worked on: “By 1965 we had what we thought would improve our facilities with not too great an expenditure and these plans were sent in for approval.”  But then disaster struck.

Read Part 4: A Phoenix From the Ashes

This website uses cookies to improve your experience while you navigate through the website. Out of these cookies, the cookies that are categorized as necessary are stored on your browser as they are essential for the working of basic functionalities of the website. We also use third-party cookies that help us analyze and understand how you use this website. These cookies will be stored in your browser only with your consent. You also have the option to opt-out of these cookies. But opting out of some of these cookies may have an effect on your browsing experience.
Necessary Always Enabled
Necessary cookies are absolutely essential for the website to function properly. This category only includes cookies that ensures basic functionalities and security features of the website. These cookies do not store any personal information.
Non-necessary
Any cookies that may not be particularly necessary for the website to function and is used specifically to collect user personal data via analytics, ads, other embedded contents are termed as non-necessary cookies. It is mandatory to procure user consent prior to running these cookies on your website.
SAVE & ACCEPT
X